Blog - Latest News
You are here: Home / Human Interest / When a Marine becomes a Chaplain ….chris sheriff tells his story

“Through many dangers, toils, and snares I have already come,” we sing and it is the Amazing Grace that song declares that has been a steady foundation for me. When I was only a child, my grandparents gave me the gift of respect for God and others as they exampled for me what it looked like to be faithful in devotion to God and His church. Imagine me, an 8 year-old hyperactive little kid having to sit on my grandfather’s knee as he read to me the wisdom from the Bible, specifically the book of Proverbs (he likely had hopes that those words would somehow reign in my hyperactivity and mischievousness). If you imagined a frustrated grandfather and an equally frustrated kid then you got it right! But though the words from that King James version bible fell on deaf ears for an 8 year old, it would be the example of that faithful follower of Christ that would help shape who I am today. 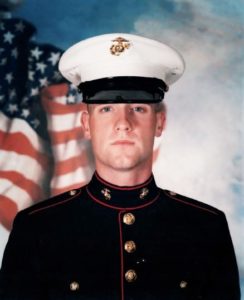 After college I joined the United States Marine Corps. Paris Island, where recruits from east of the Mississippi are sent to become Marines, welcomed me with open arms…arms ready to break me, shape me, and turn me into a US Marine. Later that year, after completing my initial training (Boot Camp, Marine Combat Training and my occupational training), I was sitting in a chow hall at Camp Pendleton, C.A. as we watched those two planes fly into the World Trade Center in NY. Breakfast was quick that day. As part of 1st Marine Division, we began desert training in Twenty-Nine Palms, CA and Yuma, AZ. That training lasted all throughout 2002 and by January of 2003 we had landed in Kuwait, offloading ships and prepping the gear to get ready for the order to invade Iraq; that order came in March, 2003.

Yet, even through the trials and pain that come with military service, I was being prepared for a greater call. Through the dust of that war-torn place, I could still see God’s hand guiding and protecting me; leading me through many dangers, toils and snares. Finally after two tours to Iraq I decided to become a civilian again in 2009 and traded one uniform for another. Many lessons are learned in service to your country, but the greatest lesson for me was the same one my grandfather tried to teach me from the safety of his knee nearly 40 years earlier…love the Lord your God and your neighbor with all your heart, no matter the cost.

The military added to my appreciation for hard work and sacrifice, understanding that though the work may sometimes seem fruitless in the moment, the seeds we plant will ultimately bring fruit. I worked for a few years in business but knew that there was another place I should be. It was a nagging kind of dissatisfaction I felt no matter the success I was having. One day in an uneventful and quite boring way, I felt as if I was being nudged out of my daily routine and into a life of full-time ministry. It was a surprise to most who had gotten to know me, but certainly wouldn’t have been a surprise to my grandfather, had he been alive to see it. So I began my seminary studies and after three years I entered my first pastorate in Fort Lauderdale, Fl. Almost four years later our family moved to beautiful Naples, Fl where I continue my ministry at The Arlington of Naples…a paradise within paradise! 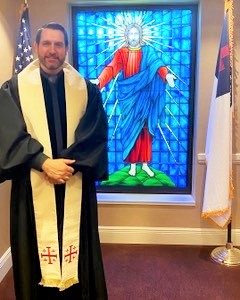 As a Chaplain at The Arlington of Naples, I now have the distinct honor and genuine pleasure in serving the residents who have chosen to make this community their home. It is no overstatement to say that I find full joy and fulfillment in my work as I counsel, pray with, teach, and worship with the residents of The Arlington. Who would have known that though it seemed hopeless at the time, my own grandfather was helping to shape me into the man that would one day care for the grandparents of others? God knew. Though He chose quite a journey through the wilderness to bring me to this place, it is the experiences of life that have helped shape me into a tool for God to use to bring hope to others. You also have a chance to shape someone. Will you?

All of us travel our own path in this journey of life. I don’t know what your path has been like, but it has been my experience that through all the turns, valleys, and mountains of life, God is leading me to my destination. Who knows what the future holds?

The Naples Players…Discover Culture in Collier
Scroll to top