Artists create. They see the world differently and it seems as if life’s current events are nothing more than a palette of inspiration. As this global pandemic continues, I find myself drawn to the pages of artists. I have found hope in their hands, their minds and their voices. When researching this article, I turned to a handful of local Seminole artists and asked questions about traditional art. I wanted to know their inspiration, downtime, their lives as artists. One artist stood out… 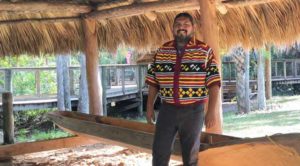 Pedro M. Zepeda. Pedro was born and raised in Naples. He graduated from Lely High School in 2001 and from Stetson University in 2005, where he earned a Bachelor’s Degree in… go figure… Art! For those who know Pedro, he is rarely seen without one or all of his four children in tow.

He and his wife, Kaleena, live in Golden Gate while surrounding themselves in the art and culture that is indigenous to this land. Pedro is known for his kindness,  compassion and for having a heart as big as his stature. Seminole traditional art has a very broad definition, but generally includes; Seminole patchwork and applique, baskets, wood carving, leatherwork, beadwork, chickee building and silverwork.

Pedro is a master at all of the above and then some. His art is found in museums across the state and private collections 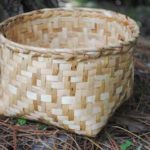 all over the world. I asked Pedro about being a traditional artist and staying busy during these last months, “I’ve always been surrounded by art since I was a child. When I was very young my grandmothers would watch me while my parents were at work. They were always sewing, doing beadwork and often cooked outside over the fire.

On some weekends the family would sell their traditional arts at festivals and powwows. As I became a teenager I began to make some of our traditional arts myself. As an adult I really immersed myself in our arts to refine them as much as I could. To me it’s important for traditional arts to be functional, beautiful, and at times innovative. For me having learned traditional arts means having a certain level of independence. There’s always something to make!” 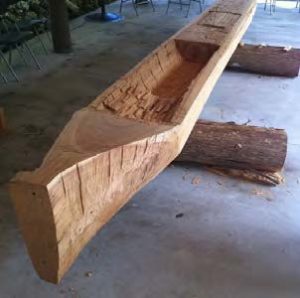 Lately, Pedro has focused on woodcarving and dugout canoes. He is only one generation away from a time when dugout canoes were used as a means of transportation. Cypress logs are carved and hewn out and when dry, they will float even when filled up with people and provisions.

Rather than sitting and using short paddles, Seminole dugout canoes were primarily used in shallower waters and navigated by standing up in the canoe and pushing the canoe along with a long pole.W hen asked about staying home during this pandemic, Pedro said, “It’s been interesting being home so much. Normally from December to May I travel with my family around the Southeast to different events and festivals to demonstrate Seminole traditional arts.

Being home has allowed time for catching up on things I’d normally put off,  like  maintaining my tools, but has given me time to reflect on what I do and where I want to go from here in all aspects of my life. My wife and I have four children and the two oldest (10 and 9) are old enough to begin learning to make some of our traditional arts. Being home more during this time does allow this to happen more frequently than it might otherwise.”

It seems only natural that Pedro would want to make sure the art is passed down to his children. The Seminole lifeblood flowing through his veins was passed to him from his grandmothers and family, “One of my biggest inspirations in my traditional
arts journey has always been my Grandmother, Tahama Osceola. She’s always encouraged me and took the time to teach. 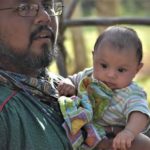 I think one of the most important things she taught me was how to learn through observation. Woodcarving  I learned from Ingram Billie Jr. I began to learn about dugout canoes from my older brother, Brian Zepeda. All my teachers led me down those paths, but it was up to me to continue down paths of learning. Our traditional arts are so much more than simple objects, they carry the teachings and knowledge of our ancestors. I’m excited that I can pass on the knowledge that I’ve been carrying onto my children.”

WELCOME BACK to Naples Art
Scroll to top