The naming of a new dean for the school of business at Florida Gulf Coast University seems like a routine happening at a place well-distanced from Naples. Yet, look closer and you learn it is a very Naples story.

The new dean, Chris Westley, is a 1982 Naples High School graduate, and the business school – in the signature building that greets visitors using FGCU’s main entrance – is named for Naples’ prosperous and philanthropic Lutgert family.

As Westley’s mother, Susan, a retired kindergarten teacher at Poinciana Elementary School, observes, her son has come full circle since coming from depressed Toledo to vibrant Naples in 1980. The contrast was an epiphany about the power of money. Two years later, when he graduated from Naples High School, higher education offered few local options: Edison Community College (now Florida SouthWestern State College) and a University of South Florida satellite in Fort Myers. FGCU was not even a gleam in Southwest Florida’s eye. 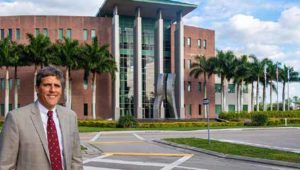 Off he went to Gainesville, followed by a master’s degree in San Antonio and a doctorate at Auburn. After teaching 15 years, Westley arrived at FGCU in 2015 as an economics professor and director of regional economic research. He met – and advised — business and civic leaders from Cape Coral to Naples. He made friends along the way with his gusto for analyzing growth, tax receipts, impacts of prospective businesses (even The Naples Players) airport traffic and employment.

He helped compile the Community Foundation of Collier County’s landmark “Vital Signs” with original polling and research on public needs. His monthly regional economic snapshots are must-reads for policymakers. His approach helped him learn what the community needs from FGCU, and it created learning opportunities for students who pitched in.

That positive impact is, Westley explains, part of The FGCU Effect – a slogan at the forefront of FGCU’s marketing. Another FGCU effect is building a workforce talent pool that appeals to high-wage employers who diversify the economy, and creating jobs on and off campus that allow local talent – like him – to stay or come back home. He easily names students who now hold key jobs in Naples commerce, and there will be lots more coming from the second largest school at FGCU, with 4,000 of its 15,000 undergraduates.

He quickly became immersed in FGCU leadership and strategic planning as part of one advisory committee after another.
He brings the same work ethic to his writing and editing for newspapers as well as professional and academic journals around
the world. Topics are as far-flung as the impact of spending on college sports victories, voter turnout, income inequity, medical
costs and malpractice and FEMA’s response to Hurricane Katrina. He has weighed in on Enron and Microsoft. He awaits publication of a dictionary of Austrian economics.

It is a labor of love, he explains. Economics is connected to everything, and there is always something new and interesting to
discover. His work ethic is traced to his late father, Phil, a stockbroker who opened the Dean Witter office on Naples’ Fifth Avenue South. Chris would ride his bike there after school and revel in the office talk about Wall Street. Susan Westley, a Golden Apple award winner in 1996, says: “Phil taught Chris the value of a good education and a strong work and moral ethic.” He adds he gleaned fatherly cues (“Life is a gift”) about civic involvement at St. Matthew’s House and Youth Haven.

Chris Westley recalls other bike rides – to the Naples Beach Hotel and Golf Club in the 1980s to work as a waiter during
breaks from the University of Florida, earning enough each time to cover a full semester’s tuition, books and spending money.
“That was when you could work your way through school,” he says. Westley hopes to be able to resume classroom teaching in a
year or so, which he thinks is vital for all administrators. “Students change over time,” he explains. “We should want to be judged by what we do for those students – something tangible,” he says of his passion.

John Kenny of Naples, who worked with Westley – a first-rate public speaker — on several Greater Naples Leadership seminars,
says: “It’s nice to hear of qualified, good people getting chosen for promotion. He deserves it!” Dudley Goodlette, a fellow Naples High alumni and former FGCU trustee, adds: “I know that the pool of dean candidates was very strong. I applaud Chris and thank FGCU President Mike Martin for his wise decision and continued leadership.”

Westley’s mother, Susan, gets the last word: “I am proudest of the man he has become. He is not only a gentleman, but a kind
and loving family man with a strong faith in God.”

Foster Children are Ready to Have Fun this Summer