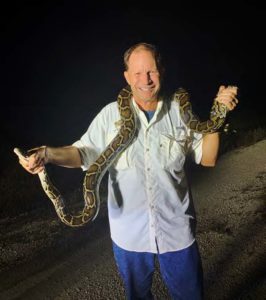 Next month, Florida welcomes Super Bowl LIV in Miami, but that’s not the only bowl happening in South Florida!

This month, from January 10 to January 19, the South Florida Water Management District and its partners at the Florida Fish and Wildlife Conservation Commission are collaboratively hosting the Florida Python Challenge™ 2020 Python Bowl.

This python removal competition invites people from all walks of life as well as experts from around the world to receive specialized training and take part in removing the harmful Burmese python from our Greater Everglades Ecosystem.

Participants are eligible to receive cash and special prizes for the most and heaviest pythons captured.

All of this is part of the Super Bowl Host Committee’s Ocean to Everglades Initiative. The public can learn more about the Florida Python Challenge™ at FLPythonChallenge.org.

The Florida Python Challenge™ 2020 Python Bowl is one big step forward in the state’s efforts to remove these invasive predators from America’s Everglades. 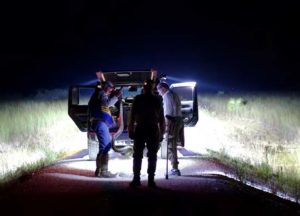 The South Florida Water Management District took this bold step to not only support restoring the Everglades to its environmental beauty and glory, but also to protect it from further harm by pythons and other invasive plants and animals.

In fact, late last year the South Florida Water Management District Governing Board dramatically expanded its Python Elimination Program, which has already removed hundreds of these invasive predators from America’s Everglades following Governor DeSantis’ challenge to the water management district and the Florida Fish and Wildlife Conservation Commission to do more to tackle this problem.

We were overwhelmed with interest and received thousands of applications from around the world to join the fight against pythons. However, I’d also like the public to know that we are not just bringing on more people to take the fight to these invaders. We are also working with our partners to find new technologies, science and tools to fight these snakes wherever they hide.

We’re exploring all options from tracing python DNA that helps us learn where pythons are to using specially trained dogs that can help locate the elusive snakes by scent. This science will give our experts the most effective means of eliminating these predators. 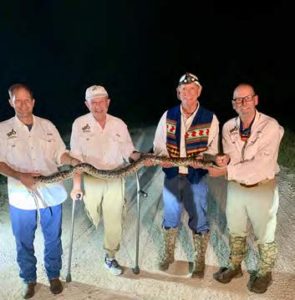 Exploring the use of new technology as well as tried and true methods such as using dogs will improve efficiency in our efforts to locate pythons. Removing pythons is an important piece of Everglades restoration.

If you’ve lived in the Southwest Florida area for a while, you know that taxpayers in Florida and the entire United States have invested billions of dollars to restore America’s Everglades. Burmese pythons, as well as other invasive plants and animals, threaten to further disrupt our important Everglades ecosystem, and our increased efforts to supercharge the Python Elimination Program is making a real difference in removing these harmful, non-native predators from the Everglades ecosystem.

Our enhanced stewardship protects one of the largest wetlands in the world, so that Everglades flora and fauna will thrive and flourish for generations to come.

A Call to Foster
Scroll to top