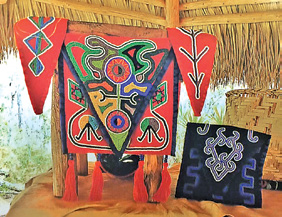 Meeting someone born and raised in Naples is rare, but not when you consider they are a Seminole Indian.

For most boys who grew up in East Naples during the 1970’s, their days were filled with baseball, the beach or fishing at the pier. That was not the case for Naples born, Brian Zepeda, 47, a member of the Seminole Tribe. Brian was raised in a native village in East Naples, where he spent his days helping his great-grandfather, legendary Cory Osceola, feed alligators. He also spent a great deal of time in the family run business, a gift shop where Cory sold the arts and crafts the family made by hand.

Zepeda learned how to sew intricate patchwork, unique to the Seminoles, by watching his grandmothers who spent hours upon hours cutting strips and strips of material together to form elaborate designs. He also learned to make sweetgrass baskets, carve cypress wood, and bead.

Zepeda grew up in the family business of making and selling traditional arts. The role he plays in the world of American Indian Art now includes being among more than two dozen native artists from across the country who are featured in Walt Disney World’s latest addition to EPCOT’s American Experience, “Creating Tradition: Innovation and Change in American Indian Art.’

The exhibit is a collaboration between Disney’s Imagineering Team, the Smithsonian’s National Museum of the American Indian in Washington, D.C., and the Museum of Indian Arts and Culture in Santa Fe, New Mexico.

The team chose an elaborately beaded black wool bandolier bag, similar to the bags worn by the great Seminole War leaders of the 19th century. Zepeda is not a stranger to museums. Most of his career was spent working at the Ah-Tah-Thi-Ki Museum, the Seminole Tribe’s holder of its nation’s treasures.

Zepeda’s beaded items can be found by collectors all over the world, so it is more than appropriate that his work can now be seen by the hundreds of thousands of visitors to Disney’s EPCOT’sAmerican Experience. 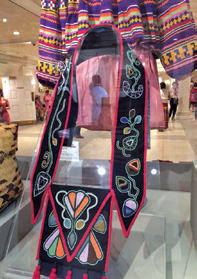 Other than being selected as a featured artist, one of Zepeda’s biggest surprises was to discover that of the 89 pieces chosen to be in EPCOT’s exhibit, his bandolier bag sat alongside a patchwork purse sewn by his late great grandmother, Juanita Cypress Osceola.

Zepeda grew up in Naples and attended Shadowlawn Elementary and East Naples Middle School. He graduated from Lely High School, where he was best known for lifting weights and playing in their famous Marching Band.

Zepeda lives in Golden Gate with his wife, Laurel Steppling Zepeda. They are the busy parents of three children, Corinne, a junior at Xavier University in Cincinnati, Ross, a freshman at Tallahassee Community College, and Serena, a senior at Golden Gate High School. In addition to being a master traditional artist, Zepeda is also a Seminole Tribal Council Liaison for the Naples Community and manages the Juanita Osceola Center, a cultural outreach program for tribal members who live in the area.

Seeing Beauty is a Choice
Scroll to top