Blog - Latest News
You are here: Home1 / Uncategorized2 / A TRUE STORY OF LOVE, VIOLENCE, AND THE SPIRIT TO LIVE 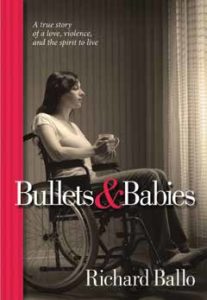 At 32, Janice wondered when life would get better, because she and Ron, her second husband, were separated. She loved him and that was that. She knew she could reconcile with him and life would get better. They agreed to meet at the local pool hall to talk reconciliation. They were drinking beer, playing pool, and having a good time.

They talked with people too. One person they met was Jim. The three of them left the bar and went to Jim’s house to look at Jim’s gun collection. Two months later Janice woke up in a hospital room wondering why she was there.

She couldn’t remember the night at the bar. Ron told her they had been looking at guns, and well, he shot her. Not only did he shoot her, but the single bullet traveled through both lungs, ricocheted off ribs, and shattered her spine between the 6th and 7th cervical vertebra. She was now paralyzed from the waist down. She cried out, “This can’t be my life!” But, it was her life. As a child she was never able to please her father. Her father made her feel fat and ugly, and her best was never good enough for him., even though she was a high school cheerleader and earned good grades.

As a teen, she became pregnant and married at age 16. In a few years, she became a battered wife, crashed a car, divorced, separated, remarried, was beaten bloody by a boyfriend, and now she had been shot. After rehabilitation, Janice returned home to live life in a wheelchair. Her kids were scared and confused. Her parents
demanded the kids do more housework. Ron’s guilt over the shooting drove him to drink, and he left her. Without a husband, a job or income, Janice faced a life seemingly with no future. She thought suicide was the answer to her depressing situation. She set out to end her life, but God had a different plan for her.

Janice took control of her life, even moving 1000 miles away from her parents, and all that was familiar to her, to build a new life. Janice’s grit, determination, faith, humor and love kept her family together. Eventually the kids grew up, moved out and had children of their own. Janice loved babies, yet as the years passed her physical abilities deteriorated until she became bedridden and couldn’t freely travel to see her grandchildren.

One Christmas, after seven years of not talking to Ron, she called to see if he was still alive. She found him clean and sober. She forgave him for shooting and abandoning her. She showed him mercy. He showed her love and commitment. He became a frequent visitor in her home. They even lived together for a while, but Janice’s
medical needs were too great for the elderly Ron. Their life, love and her forgiveness show us all the power of
love, and the determination to overcome life’s obstacles.

“This inspirational and uplifting story will challenge readers to examine moments of tragedy that every human face in their mind, body, and spirit,” says Dr. Rev. Peg Daly of Kingdom Life Anglican Church in Naples, FL.

Bio Richard Ballo, BS.J., MBA, is the author of an award-winning book and journal. “Bullets & Babies” is his fourth book. He is a national speaker on overcoming life’s obstacles, grief and healing. He has appeared nationwide in person, on the radio and television. His articles have appeared across the nation in books, magazines and newspapers. He is a former board member of Avow Hospice of Naples, former board member of Seacrest Country Day School and has been active in Kiwanis for more than 20 years. He and his wife Terri live in Naples.

GETTING THE MOST ENERGY For your Excercise
Scroll to top