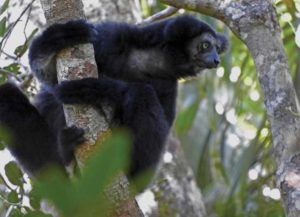 Isolated off the coast of Africa for eons, Madagascar’s unique biodiversity is so extravagant that it has been called the eighth continent. Four of every five of its plants and animals live nowhere else on earth. But superlatives both bless and curse Madagascar. The island’s biological abundance is cruelly matched only by the extreme lack endured by the Malagasy people. Thus the survival of its lemurs and numerous other endangered species and habitats is forever entwined in the well-being of the people who share the land. Recently, Naples Zoo’s Director of Animal Programs Liz Harmon and I traveled to this extraordinary island to participate in conservation meetings and assist in both wildlife and people.

Because of this island’s significance, Naples Zoo has supported conservation efforts in Madagascar for the last two decades. Naples Zoo is a Managing Member of the Madagascar Fauna and Flora Group (MFG) that works in eastern Madagascar. I serve on the executive committee and as an advisor. To protect critically endangered species like ruffed lemurs and indri, the zoo increased our commitment to help fund operational costs protecting some of the last remaining eastern lowland rainforest in the Betampona Natural Reserve. In addition, the Zoo helped raise $18,000 to purchase emergency supplies 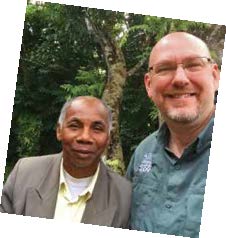 and timber to rebuild a village bordering the reserve following a devastating fire. The mayor thanked us for our work on their behalf.

On the botanical front, the MFG received a Darwin Initiative grant from the British government to secure plants not currently found in protected areas as a hedge against their extinction. We were honored to be there for the dedication of the new facilities as part of the meetings we attended. It was Madagascar’s rosy periwinkle plant that provided the crucial alkaloids that have saved countless cancer patients over recent decades.

Two 11-hour drives away, we found ourselves in the dry forest of Ankaranfantsika National Park in the northwest. This season, the zoo helped fund National Geographic Explorer Dr. Luke Dollar and his team and also provided three GPS collars to better understand the needs of island’s top carnivore: the fosa – pronounced foose-uh and formerly spelled fossa. This species is often persecuted by locals, but it’s a key species in controlling some of the wild pigs and rats that destroy rice fields and stored grains. A critical issue as rice is life itself for the Malagasy people. 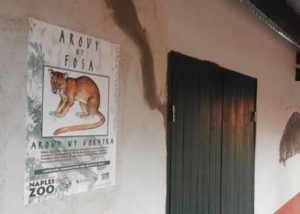 Harmon and I were with Dr. Luke Dollar and his team as they caught the last fosa of the season as part of this research. Efforts like these and many others are only possible because of our visitors, members, and donors. So what can you do to help Madagascar? Visiting and supporting an accredited zoo is an easy first step. Because of our supporters, Naples Zoo is able to fund everything from discovering new species to patrolling rainforests. We support a village school, distribute conservation education resources, and reduce deforestation by funding Rocket Stoves that both reduce the use of firewood and cooking time by 50 percent. But the needs and opportunities surpass current resources. We need your help to take what we’ve learned to expand the good we can do. Madagascar simply cannot wait. Please contact me at tim@napleszoo.org to bring hope to this wondrous island. Learn more about the MFG and our other programs at ww.napleszoo.org/conserve.