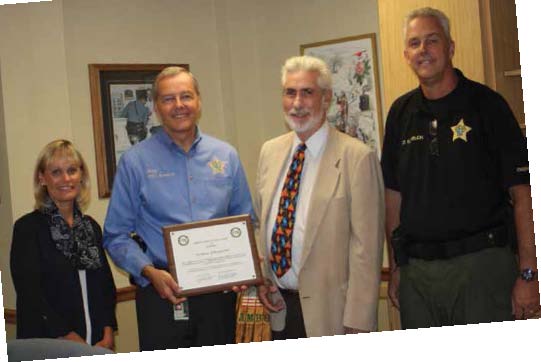 When it comes to preparing law enforcement officers for interactions with people in crisis, the Collier County Sheriff’s Office is the gold standard.

CCSO recently was honored for its commitment to providing specialized Crisis Intervention Team (CIT) training to the community, _ a program that improves outcomes for deputies, persons in mental health crises, their family members, and the community as a whole.

The Florida CIT Coalition presented Sheriff Kevin Rambosk with a Gold Standard Certificate recognizing CCSO for meeting and exceeding the Memphis Model Core Elements. The Memphis Police Department in Tennessee developed CIT training in 1988 to give officers enhanced training related to people with mental illness and teaches de-escalation techniques. The training has proven to reduce injuries and deaths to police and people with mental illness.

CCSO is the only agency to achieve gold standard status out of an estimated 150 counties and municipalities with CIT programs in Florida and the first agency to be awarded a Gold Standard Certificate, said Larry Thompson of the Coalition.

The Florida CIT Coalition is comprised of representatives from communities across Florida currently providing CIT training based on the Memphis Model. The group supports statewide implementation of CIT training for law enforcement officers.

CCSO celebrated its 1,000th graduate of the CIT training program in November. More than half of those trained are CCSO deputies.

“The Collier County Sheriff’s Office CIT program has provided its deputies with new tools to address the needs of its citizens with mental illness who are in crisis and others with disabilities, and has moved beyond this important component of training to develop a first responder system,” said Saunders. 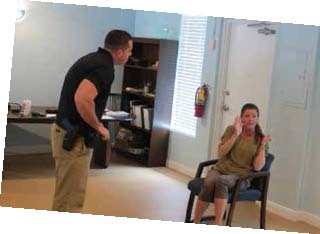 Deputy Kevin Saliba and Megan Cobb of NAMI of Collier County engage in a role-playing scenario enacting de-escalation strategies during a mental health crisis during a CIT training class in October. In this scenario, Cobb portrays a woman who has taken a number of pills and is suffering from severe depression. Photo by Cpl. Efrain Hernandez/CCSO

Sheriff Rambosk’s goal is to have 100 percent of Collier deputies trained in CIT.

Sheriff Rambosk said CCSO shares the honor with the many organizations and individuals that have partnered with the Sheriff’s Office since 2008 to bring CIT to Collier County, including the National Alliance on Mental Illness (NAMI) of Collier County and the David Lawrence Center (DLC). NAMI and DLC provide the funding, facility and staff support for the training. “This certification underscores the incredible commitment of Sheriff Rambosk, the Collier County Sheriff’s Office and the Board of Collier County Commissioners who have prioritized the assurance that mental health and addiction challenges in the community are met with the most compassionate and effective interventions,” said Scott Burgess, chief executive officer for the David Lawrence Center. “We are grateful the CCSO is receiving this recognition for their dedication to CIT training and for their exemplary leadership in advancing this initiative, not only in Florida, but across the nation.”

“Through its collaboration with NAMI, the Collier County Sheriff’s Office has always ensured that advocates and individuals with mental illnesses are integrally involved in CIT design and implementation,” said Baker.

Baker noted that CIT training is offered locally at least five times per year, which takes considerable time and resources.

“By ensuring that as many officers as possible are trained in CIT, including other local jurisdictions, CCSO minimizes unnecessary jail admissions and maximizes humane treatment for people with mental illnesses,” Baker said.

Collier County Judge Janeice Martin is CIT trained, having taken the 40-hour course in 2009 as she prepared to become the presiding judge over Mental Health Court.

“I found the course to be extremely helpful to me in understanding how to recognize and interact effectively and respectfully with persons who were suffering from a mental health diagnosis,” she said.

Judge Martin said she sees the benefits of CIT training on a near daily basis in her role as a criminal court judge and in her role as the presiding judge for all three local treatment courts: Mental Health Court, Drug Court and Veterans Treatment Court.

“I note that whenever possible, persons are being diverted from jail into treatment on Baker and Marchman acts – and those petitions are being supported by detailed and thoughtful affidavits by the trained officers,” she said. “And when diversion is not possible, and an arrest must be made, I see efforts to de-escalate the situation, minimizing the number and type of charges that must be brought.”

Furthermore, she said, reports now include valuable details about any signs and symptoms of mental illness that were observed by the officer. Those report details help ensure the court system identifies the person as a potential treatment court participant earlier in the process, thereby reducing unnecessary time in jail and expediting the move toward meaningful treatment.

“I commend the Sheriff for his leadership in this area, for recognizing years ago that law enforcement is not a one-size-fitsall endeavor,” Judge Martin said. “His efforts to provide officers with these additional tools for use in interacting with and serving the mentally ill bring benefits throughout the community. Officer safety and public safety are improved, persons in need of services are linked with those services, and valuable law enforcement resources are conserved in favor of treatment whenever possible.”

FROM THE HOLY SEE TO THE EVERGLADES: THE LEGACY OF LOVE CONTINUES
Scroll to top