Blog - Latest News
You are here: Home1 / Charity News2 / Zoos using the doppler effect and satellites to save the loudest bird on... 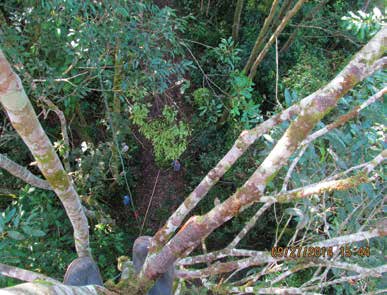 As the team set up their treetop equipment in the cloud forest, the birds they had dedicated so much of their lives to seemed to be welcoming them. Research team leader Dr. Robin Bjork stood mesmerized by the “symphony of loud bells, bonks, and squeaks calling all around us.”

These were the exotic sounds of one of Central America’s most endangered birds – and the world’s loudest.

Tucked away in the jungles on a mountainous spine of the Sierra de Agalta National Park in eastern Honduras, it’s both ironic and unsurprising that most people have never heard the loudest bird on Earth. And yet that’s just the beginning of enigmas when it comes to the three-wattled bellbird. To unravel some of those mysteries, Naples Zoo along with two other accredited zoos (Zoo Boise and Disney Worldwide Conservation Fund) recently funded new groundbreaking research in hopes of obtaining key conservation data in a virgin cloud forest that is also home to tapirs, jaguars, ocelots, monkeys, and hundreds of other bird species. 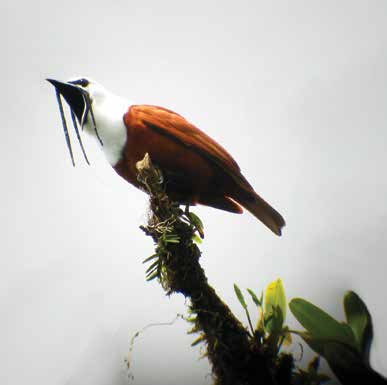 The birds’ unusual name comes from their iconic bell-like vocalization that can be heard over a kilometer away combined with the three long ‘wattles’ that hang from the corners of the mouth and beak of the male bellbirds. (Hear it on the Zoo’s website: http://goo.gl/YRtuHG)

In late September 2014, the field research team traveled deep into the jungle to attach Argos transmitter units to four of the rare bellbirds before releasing them back into the wild – a first-ever tracking of this bird using satellites allowing for data collection over great distances in remote areas.

A technological wonder because of their light weight, these state-of-the-art monitoring devices are solar powered and weigh less than a fifth of an ounce.

The Argos satellite system locates the transmitter using the Doppler effect – commonly noticed as the change in pitch from high to low as you listen to a train whistle as it passes. As the train approaches, the sound waves are effectively shortened in relation to you creating the higher pitch and lengthened as it passes giving the lower pitch. (It also works with other waves and is part of the discussion when it comes to “red shift” and how astronomers discovered that galaxies are moving away from Earth.) So just like your location by the train track determines when you will hear the change in pitch of the whistle, the Argos satellites work together to locate the bird based on the changing wave frequencies received from the birds’ transmitters. 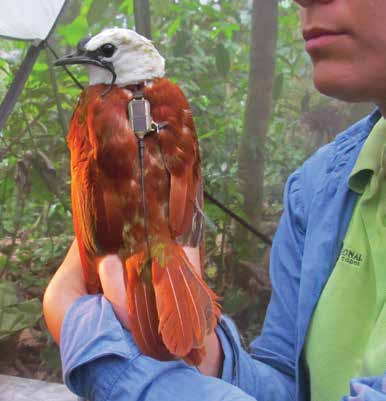 This field research is a crucial component of the Zoo Conservation Outreach Group’s (ZCOG) Three-Wattled Bellbird Conservation Monitoring Program. This latest expedition has already enabled the researchers to begin studying the complex migratory movements of the bellbirds in their range between Honduras and Panama. Bellbirds congregate in the rugged Sierra de Agalta region to feast on abundant fruiting trees from July through September. But then bellbirds disperse in complex annual migratory movements between some of the most biodiverse and threatened regions of Central America. This research should reveal many of the secrets of that migration.

ZCOG Executive Director Dr. Daniel Hilliard says that this program “aims to fill a gap in scientific knowledge by providing a better understanding of the migratory patterns of the bird, which are crucial to developing comprehensive conservation planning.”

The ultimate goal of the project is to better understand the behavioral ecology of the bellbirds in an effort to promote conservation of the species and their tropical cloud forest habitat and its endangered wildlife – a mission hammered home to the team as they hiked past
recent hillside logging on their way out of the park.

As a member of ZCOG’s Executive Committee, I’m personally excited about this project. With Dr. Hilliard’s unique experience and trilingual capabilities, he brought together a bellbird dream team of experts for an effort where normally you may only have one or two. The field research of that team is being led by Dr. Robin Bjork, and includes Jenifer Hernández, a biologist with the Honduran Forestry, National Parks and Wildlife Institute (ICF), along with local conservationist Isidro Zuniga. Additional support is provided by Dr. Mark Bonta and Robert Hyman of the Honduran Conservation Coalition, and Said Lainez, Director of the Department of Wildlife at ICF.

Dr. Mark Bonta, project consultant and author of Seven Names for the Bellbird, hopes that the research “will not only expand our information about the three-wattled bellbird, but also draw attention to sustainable development and forest management in the Sierra de Agalta region.” Using this effective technology, the research team is already collecting data from the four bellbirds to do just that.

Naples Zoo is an institutional member of ZCOG and supports several of their conservation efforts including an annual Naples Zoo scholarship to educate wildlife colleagues in the Caribbean basin as well as funding critical research on giant anteaters and the little known giant armadillos. To learn more about these and the Zoo’s other field conservation programs ranging from Florida panthers to Malayan tigers, visit www.napleszoo.org/conserve. And to explore financially supporting wildlife conservation opportunities like these, contact me
directly at tim@napleszoo.org.