Blog - Latest News
You are here: Home1 / Columnists2 / What she did for love

Jewelry designers often work from the inside out–they start with what they love and move forward drawing inspiration from a stone or a certain shape that speaks to them. This organic method of creating reveals itself in a uniqueness dominating each piece. Savvy collectors recognize that they’ll never encounter the exact package again–the message of the designer in fusion with the stone and the piece itself. 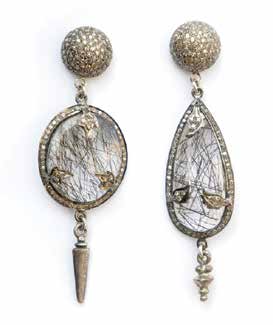 Naples jewelry designer Maryann Scandiffio allows a stone to speak to her and takes a cue from what each gem contributes to the custom design process. Lately she’s been fascinated by some exotic choices like tourmalated quartz and chrysocolla. Haven’t heard of these, you say? You’re in good company. Most collectors need a bit of tutoring to understand these extraordinary gemstones.

“I like designing with tourmalated quartz,” she explains, “because the needle-like black tourmaline inclusions appearing within natural clear quartz fascinate me.” Scandiffio loves the exciting effect created by the randomly oriented black tourmaline needles inside the clear quartz. “They are a great counterpoint for diamond pavé as well.” Tourmalated quartz is so mesmerizing, she claims, that often people do not notice right away the asymmetrical difference of shapes of her artful earrings.

Chrysocolla also enjoys most-favored status with this designer, because as she notes, “I’m designing with the peace stone as chrysocolla has been called. I believe we are all here to bring peace and love to the world in our own unique way. Designing jewelry is my way of accomplishing that mission.” 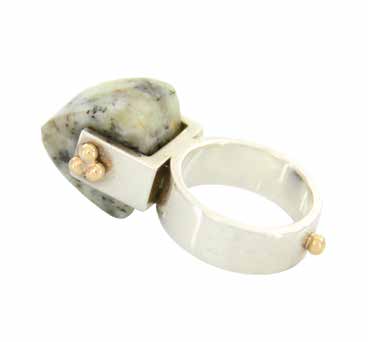 Preview her work up close and personally at Mark Loren Studio in Mercato and Provident Jewelry on 5th Avenue in Naples.

No matter what she creates, you can be sure designer Maryann Scandiffio has a message inherent in each piece, and its foundation starts and ends with love.

Zoos using the doppler effect and satellites to save the loudest bird on ea...January 2015 Art After Dark
Scroll to top