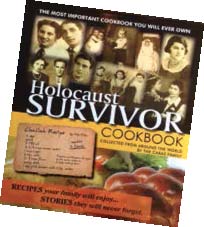 The heart behind the cooking at the Holocaust luncheon are the survivors. And the recipes from the cookbook attendees will receive come from Jewish and Eastern European cooks who understand what it means to prepare a traditional Jewish meal. Some of the items in the cookbook will make an appearance on plates during the luncheon,
including a dish from Rosette Gerbosi, a well-known local survivor of the Holocaust. In addition to sharing her dish, she will also share her story as the guest speaker. Her chocolate mousse cake, which appears in the second volume of the Holocaust Survivor Cookbook, will also be served. This cookbook highlights traditional recipes handed down through several generations as well as stories from survivors. The mousse cake is what her mother used to serve.

“My favorite recipes are connected to our local survivors because I know them so I feel like if I’m making or eating those recipes I feel connected to those families,” says Amy Snyder, executive director of the Holocaust Museum. “But one of the funny things is most of the recipes are very traditionally Jewish but my nephew’s favorite recipe for which he made for his class is Key Lime Pie – definitely not Jewish, but it was a favorite recipe of a survivor and she loved it so that’s what she chose to be included in the cookbook.”

The luncheon is one, a celebration of the survivors of the Holocaust and two, a remembrance of victory rather than dwelling on the sadness of the event itself.

“The Nazis ultimately wanted to wipe out the culture and traditions, so the fact that not only were there physical survivors, those survivors were also able to carry on the family tradition and that those are still there, that is really a triumph,” says Snyder. Food is one of those things that is universal and we all have some sort of tradition with food as it is a cultural thing.”

The cost of the luncheon is $125 and includes a complimentary cookbook, which is otherwise available at the Holocaust Museum for $36.