Blog - Latest News
You are here: Home1 / Columnists2 / August State of the City – A Message on a Coconut

Life in Naples is great! Situated on the Gulf of Mexico, we enjoy year round balmy weather, pristine beaches, arts and culture, among other amenities at our finger tips that
promote an active lifestyle. As part of my exercise regimen, I walk on the beach most mornings and have recently taken up paddle boarding. On April 25th, my morning stroll on the beach was extra special. Instead of finding a message in a bottle, I found a coconut with a message attached to it that had washed up on the beach.

The coconut was painted pink and green and the message read, “Congratulations! You have found one of the Sanibel Sea School Octifest Coconuts used to study currents along Southwest Florida. Please give us a call and tell us where you found it, along with the coconut number. We will even send you a dollar for your assistance.” My coconut number was 53. I called the phone number on the tag and informed them that I was the mayor of Naples, and had found a coconut and gave them my number. The school was delighted that the mayor of Naples had found a coconut. And no, I did not accept the dollar. 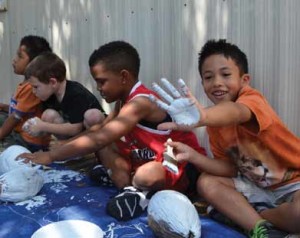 Each year in mid-February, Sanibel Sea School students collect fallen coconuts from around Sanibel Island, and paint them to resemble an egg, just in time for Easter. This year, 150 students participated in painting the coconuts and on April 22nd, they were sold to guests at an annual fundraiser called Octifest to raise money for environmental education programs for underprivileged youth in Southwest Florida. After the event, approximately 200 coconuts were released 20 miles offshore in the Gulf of Mexico.

This experiment was to better understand the currents of the Gulf of Mexico. The first coconut reported landing was number 187, it washed up on Vanderbilt Beach near  Wiggins Pass State Park in Naples on April 23rd at 9:55 am. Other coconut landings were at: Pelican Bay, Seagate Beach Club, Park Shore Drive Beach access, Doctors Pass and the Naples Beach Club, to name a few. I must say, this was a great project for the youth and I was glad to be a part of it.

Delores and I first came to Naples in 1979 and immediately fell in love with the small town, and moved here fulltime in 1998. Within a short time of arriving, we became involved in the community by volunteering and serving on several community boards. Fast forward to 2014, we have planted our roots, met so many wonderful people in
the community, and I became a City Council Member in 2004 and then Mayor in 2012. I must say, it has been a great journey, especially seeing the City grow by leaps and bounds.

This season was really busy for everyone, and people tended to stay longer because of our great weather and colder weather in other places. It seems as though just as season began, it was over in a flash after Easter and now the summer is here and it is hot and humid.

The housing and construction markets have rebounded since the downturn, and tourism hit an all-time high this year. According to the January 2014 to May 2014,
Collier County Marketing Partner Reports, 870,500 people visited Collier County, 1,197,200 hotel room nights were occupied, which resulted in an economic impact of $1,005,684,569.

The historic Naples Pier, popular for sightseers and anglers, was visited by 556,325 people from January – June, 2014. That is amazing for a structure that was originally built in 1888 as a freight and passenger dock and one of the main entrances into Naples during those times. The Pier is 1,000 feet long and jets into the Gulf of Mexico.

This well used structure serves the community well and is now in need of a makeover. The City anticipates that the $892,000 project will commence in November and take approximately six weeks to complete. The superstructure (walkway deck, railings and pier amenities including plumbing and electrical components for running water, lighting, etc.) and substructure (wood structural frame, frame connections to the concrete pile cap beams, plumbing and electrical utilities mounted to the pier) are included in the design.

The core project focuses on replacing the deck board and top cap railing with a composite material such as Fiber Force as opposed to pressure treated lumber.

On June 11th, City Council approved the contract for CDM Smith to provide professional engineering design and permitting services to the 30% level for the development of the new Baker Park. The process will be a 30, 60, 90, and 100 percent approach. The first step will be a 30 percent deliverable where the environmental, core samples, basic plan and refined cost data will be delivered. This will include the Gordon River Bridge, which the City will now be responsible for, over to the airport side of the Gordon River which will connect to the Gordon River Greenway.

The City anticipates that the 30 percent design phase will be completed between the December 2014 and January 2015 timeframe. The project is on a slow and steady pace due to the careful analysis that will take place to insure that our City has a quality park for all to enjoy.

With the summer, comes hurricane season, June through November. I encourage residents to get prepared by making sure you have an emergency plan for your family. Part of your plan should include water, non-perishable food for up to seven days, a first aid kit, list of your prescription drugs, important phone numbers, bug repellent, a flashlight with batteries, and personal hygiene products, to name a few. Make sure to sign up for the City’s CODERED notification system for pending hurricane and other emergency notices. Go to www.naplesgov.com, and click on the CODERED logo in the upper right corner. Another program I would encourage you sign up for is Smart911, which is a secure and confidential database that allows residents to create their safety profile of vital information (such as any medical conditions and medications you
are taking), and you can upload your photo. The information you provide will display on the 911 operator’s monitor in the event of an emergency, allowing first responders to help you better. To sign up, go to www.naplesgov.com, Departments, Police, Smart911 and click on the Smart911 logo, it only takes five minutes.

Wishing everyone a great summer and for many, I will see you in the fall.

I am very excited about this opportunity to reach so many people in the community and encourage each of you to become involved with your local government as you deem appropriate. All ideas, suggestions or comments are welcome; please contact me by calling 239.248.1550 or send me an email at Jsorey@naplesgov.com.