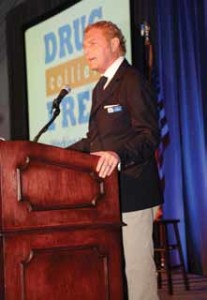 Board Member Vin DePasquale speaks about the CORE Society

A recent storm that had the chandeliers swaying at Drug Free Collier’s Sixth Annual Community Awareness Luncheon provided the perfect analogy for the tempests in life that often chase individuals who struggle with addiction. The room was packed with distinguished guests, concerned citizens and strong advocates who were not about to let the storm sway their commitment for protecting our local children from substance abuse. They remained steadfast and pledged to make a difference. The collective passion generated by this group produced a magnificent rainbow of hope for our community.

This year’s luncheon raised more than $45,500 to support local prevention efforts throughout schools in Collier County. This valuable funding will be used to grow and enhance Drug Free Collier’s CORE Society, a social club with an important purpose.

By standing together against harmful substances, these students are making a difference and helping to improve their environment and our future! The CORE Society began at Naples High School in 2009 with a handful of students pledging to be drug free. Today, there are more than 400 students in 10 schools throughout Collier County who are standing up to say: “Everyone isn’t doing it!” They are positively changing teen perceptions about drug abuse in our community and are creating a new standard for their peers.

The program began with a special presentation honoring Sheriff Kevin Rambosk for his proactive efforts in protecting the children of Collier County. Sheriff Rambosk was one of the founding members of Drug Free Collier when it was established in 2005. At that time, he said drug use rates were lower than they had been in more than 20 years and no one thought there was a drug problem. 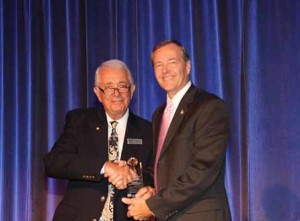 “That became a problem when all of a sudden we found that there were more than six emergency cases per week for overdoses of drugs in Collier County. We went from virtually 17 drug deaths in Collier County to 45 drug deaths in a year including nine juveniles which we had never had before,” Rambosk said. There was a real need to do something, he added.

So under Judge Lauren Brodie’s leadership, the Substance Abuse Coalition of Collier County was formed. Today you know it as Drug Free Collier.

Sheriff Rambosk commended attendees for their support of local prevention efforts and urged: “We need this community to say, we don’t accept anyone, particularly young people getting involved with drugs.”

Drug Free Collier Board Member Vin DePasquale followed by saying: “Substance abuse among youth is a critical problem as you heard from Sheriff Rambosk. Peer Pressure is tremendous among teens using alcohol and drugs to fit in.”

After a powerful video about the CORE Society with testimonials from students, teachers and parents, DePasquale offered a compelling personal struggle that motivates his desire to make a difference.

“The past 11 years, I’ve been greatly saddened by the loss of my son to a drug overdose. I’ve had a lot of anger with this sadness. Enough anger to go out and hunt the drug dealer down, find him and turn him over to the Sheriff to get him off the streets,” DePasquale shared.

“My interest and commitment is to the children in our community to understand the threat of drug abuse that’s haunting our community,” he said. We must provide children with the knowledge to help them make clear decisions that are in their best interest; give them a safe environment to grow and also a safe environment where they return to enjoy the successes in their life, he added. To make this possible, we need the support and commitment of our community, he urged.