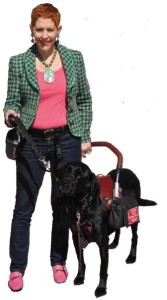 Dutch’s selfless service when caring for Lynn Hertel is inspiring. He knows when she needs to take her medicine, when she will fall ill and even when she’s spent too much time on the computer. But Dutch isn’t a doctor, physical therapist or nurse. Dutch is a companion of the highest heart: he is a service dog, one of hundreds of canines serving as essential companions assisting people with physical and cognitive disabilities.

Hertel came about getting Dutch as a result of having a brain tumor, which she survived. But removing the tumor caused damage to her brain and resulted in a traumatic brain injury. She had to go through extensive neurological rehab and somewhere along that process she was fortunate enough to meet a woman who had one of these dogs. The woman believed Hertel to be a good candidate for a service dog.

“I instantly started bawling because I have always had dogs and I had an 11 month puppy when I found out about my tumor and thus had had to find another home for it,” said Hertel. “I was overwhelmed about all of my new issues and to realize that there were dogs that were going to be able to help me maneuver through life with all of my handicaps – it was just extraordinary.”

In a broader stroke Dutch gives Hertel confidence and because of that she’s able to do things independently now that she wasn’t  able to do before. She is able to leave her comfort zone and re-integrate back into daily life because she can rely on Dutch’s able and loving assistance.

“He was my miracle,” Hertel said. “I always say he is my amazing grace – God sent him from above for this role.” Having a canine  partner goes beyond helping open doors, helping people walk, reminding them to take medication, it allows people to get out into the world, with this being who knows what’s going on with you better than yourself and they communicate that to you.

“So much of the joy in my life now is because of Dutch and this organization and what they have been able to give us through these dogs,” Hertel says. “The organization is a non-profit and it costs tens of thousands of dollars to train the dogs.” Even if he is out of his harness and is playing with his toys, Dutch alerts Hertel of important changes she needs to make in her day. For example, when she needs to take medication he will jump into her lap, jump down, and then jump back up. He won’t stop that behavior until she takes her medicine.

If Hertel spends too much time on the computer, which is a real cognitive strain for her, or she doesn’t listen to his tugging, which is from a leash that is tied around her waist, she’ll get nauseous and develop a sweat. It’s at this point when she must lay down.  Dutch will then lay across her, not allowing her get up until she’s adequately rested.

“If I’m at a restaurant or similar environment and I become fatigued during a meal, he will pull on his leash and that means it istime to go home,” says Hertel. When it comes to human health, Hertel explains it is like there is an invisible line. Everyone has it but hers is more immediate and in her situation, it’s challenging to know where that line is.

“But Dutch knows what and where that line is and he is never wrong – he doesn’t take no for an answer,” says Hertel. “However, people who have these service dogs have learned to listen because that is why we have the dogs and the dog actually knows them  better than they know themselves.” Despite what she went through, Hertel is grateful for every day and every tear.

“Every moment, every second of my life feels blessed,” she says. “Many of us have extreme catastrophic illnesses often end up feeling this way.” Much of that has to do with Dutch. For more information on Canine Partners for Life, visit www.k94life.org.

Diabetes and your eyesShine in the Sun
Scroll to top