Just when you think the Imagine Solutions Conference couldn’t get any more thought provoking, any more stimulating, any more exciting, the conference outdoes itself once again. This year’s theme was “Ignite Your Mind!” and included national media content and major brand partners including BBC, CNBC, NOVA and the National Geographic Society.

Hundreds attended the conference which happened on February 24 at the Ritz-Carlton Golf Resort. All of the five major sessions, one of which contained three parts were a resounding success by any standards. Tyler Mathisen of CNBC served as the host and  moderator for the day and his comments and praise reflected what attended across the board felt about the quality of the  information presented at the conference, as well as the vibe of the audience. 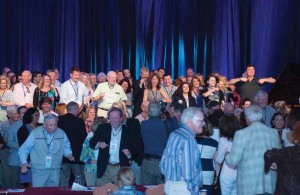 “When I recall this year’s conference, I think of what a perfect conference would look like, and what kind of impact it had on Naples,” says Randy Antik, CEO of Imagine Solutions. “Prior to the conference beginning we couldn’t have predicted the level of energy and enthusiasm that would be there.”

The conference was successful based on the number of people who attended but also for the participation by audience members and the surveys Imagine Solutions staff received after the fact.

“Dozens of people filled out surveys and 96 percent of those people gave as good a rating as you could give it,” says Antik. “The turnout was great – and I am more critical than the audience would be.”

The positive response wasn’t limited to the audience – host Tyler Matheson said he could have done an hour program on CNBC about one of the conference topics, which is a magnanimous statement to make.

“The explorer session hit it out of the park, and our 16-year old pianist Llewellyn Sanchez-Werner who was the youngest person ever admitted to Juilliard’s college division, played three pieces, and got up and spoke to audience about the importance of the arts – and he got a standing ovation,” says Antik. “Matt Harding took us into lunch and the attendees were so happy they got up on stage and began dancing – and these were some of the top people in town, retired CEOs and leaders of the community.”

That was just one memorable moment among many at the Imagine Solutions conference. During the educational session some amazing pieces of information came out and people dropped their jaws.

“In the TED conference world it’s called a TED moment – and one session leader held an impromptu elective session with 60-70 people afterwards and no one could stop talking about it,” says Antik, who couldn’t possibly choose one moment over another.

“It went very fast and I would not want to tell you a favorite topic – that would be up to the audience.”

Ted Mitchell, the new undersecretary of education knocked it out of the park, as they say, answering intricate questions that are not one sentence answers. The topic of online education was very big and the security questions associated with that, most people don’t think about – so all of that was new information.

The non-profit community came out in droves to support the event and glean valuable information for their organizations.

“We got 130 non-profit leaders and that was an exceptional response,” says Antik. “We’re talking with them about what kind of follow-up we can do for this to stay connected to the non-profit community.”

Plans for the 2015 are already underway and Antik says Imagine Solutions has two dates in mind, which they are in talks with the Ritz-Carlton to finalize.“It’s too early for speakers and themes but given our partnership with The Economist that will likely yield to even more excitement next year,” he says.

Antik encourages people to keep checking back to the Imagine Solutions website at www.ImagineSolutionsConference.com for updates on speakers and dates for the 2015 conference.

“We are starting to establish how good this could be for Naples and build on that, and also establish a national voice on certain issues like education and healthcare,” he says. “We’re the leader in bringing young talent in front of an audience like this and what we’re doing for the non-profit world, and we’ll be thinking through how to maximize that.”