Blog - Latest News
You are here: Home1 / Health and Fitness2 / Diabetes and your eyes

Diabetes mellitus remains a major worldwide cause of illness and disability. Diabetes may cause permanent damage to the retina, which is the light-sensing tissue inside the eye, similar to the film inside a camera. This damage, called diabetic retinopathy, is a leading cause of irreversible visual loss.

Ophthalmologists divide diabetic retinopathy into two broad categories, called nonproliferative (or background) and proliferative diabetic retinopathy. These can usually be detected with a dilated eye examination, but sometimes additional in-office tests may be useful, including retinal photography, fluorescein angiography (an injection of a nontoxic dye into a vein in the arm to study the retinal blood vessels), and optical coherence tomography, or OCT (similar to an ultrasound, but using light instead of sound to image the retina).

In nonproliferative diabetic retinopathy, small amounts of bleeding and other mild changes may occur within the retina. Vision may or may not be affected by these changes.

The treatment of diabetic retinopathy depends on the exact features. In almost all patients, tighter control of blood pressure, blood sugar, and weight is beneficial because it improves general health and, in some cases, will lead to improvements in the retinopathy. This may be all that is required in patients with nonproliferative diabetic retinopathy without visual loss. 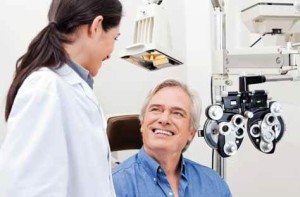 As alternatives to Lucentis, many ophthalmologists use Avastin (bevacizumab), a cancer chemotherapy drug similar to Lucentis, or Kenalog (Triesence, triamcinolone), a cortisonetype medication. Neither Avastin nor Kenalog are FDA – approved for the treatment of diabetic retinopathy. In any one patient with diabetic macular edema, the choice between laser, Lucentis, and other medications is complex and this is another area of active scientific study.

Proliferative diabetic retinopathy is treated primarily with laser, performed in the office under local anesthesia. In some patients (such as those with dense vitreous hemorrhage preventing laser), Avastin may be useful, but laser is usually eventually required. In patients with longstanding vitreous hemorrhage or traction retinal detachment, a surgical procedure called vitrectomy may be recommended. Vitrectomy involves removal of the vitreous jelly inside the eye, including scar tissue that may be causing retinal detachment, and generally includes laser treatment as well. Vitrectomy is typically performed as anoutpatient surgical procedure, usually under local anesthesia but occasionally under general anesthesia.

Diabetic retinopathy is a major cause of visual loss and blindness among patients with diabetes. It is possible for patients to have vision-threatening disease and not realize it. Patients with diabetes are advised to have yearly dilated eye examinations, even if they do not have symptoms, to search for early signs of retinopathy. If you have further questions, please consult an  ophthalmologist.

Best of Everything – Honors the Past and Plans for the Future Lynn and Dutch: Courageous Friends, Precious Souls
Scroll to top