Blog - Latest News
You are here: Home1 / Columnists2 / The Taste of Freedom

After the Civil War, Naples offered those searching for a new life a place where freedom could be tasted. While Walter Haldeman, Louisville Courier publisher, is credited as the founder of Naples, much credit is given to Ed Crayton because of the structure and plans laid for much of the charm we find in Old Naples today.

As WWI was winding down, Ed Crayton built a nine-hole course in 1919 at the southeast corner of Fifth Avenue South and Third Street South, where alligators often mistook golf balls for their eggs and fairways served as a landing strip for planes. Crayton was the kind of man, who ensured that those who returned home from the ‘war that was to end all wars’, had a job and place to live. 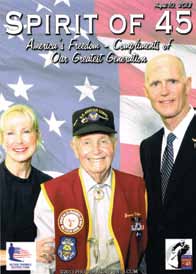 WWII, which aided our area’s economic development, was followed by the Korean War, called “the Forgotten War”; but the sacrifices of the boys of 1950, who saved millions of lives and thwarted North Korea’s evil efforts should not be forgotten – nor should Vietnam.

Richard Nixon said that the Vietnam War is perhaps the most misunderstood, misreported and misremembered war in American history. Unlike WWII, which had a mission to win the war in order to preserve our founding principle of 1776, Vietnam’s mission was to not win the war, as explained by former USAF fighter pilot and Vietnam POW , Wayne Smith. “After my commanding officer, Robin Olds, broke the news of this fact, he removed the pencil in my flight jacket and broke off the eraser saying that we don’t make mistakes here, son. That can get you killed.”

On Smith’s 90th combat mission, then age 24, he zigged when he should have zagged, which landed him at the Hanoi Hilton and eight different North Vietnam camps for five years and two months. Here he, like the so many others, came to understand the meaning of the words etched on a Hanoi cell wall, ‘Freedom has a taste to those who fight and almost die that the protected shall never know.’

I recently had the pleasure of working with ARTIS-Naples to arrange complimentary tickets for WWII veterans. After the program, the actors mingled with the veterans before WWII POW s William Zartman and Don Tallon huddled with Smith. In that short time, Zartman, experienced a kind of freedom – freedom from searching for a kindred spirit from his Nazi work camps. He found one that evening in the grand entry of the Philharmonic. Tickets to Radio Days – $75. 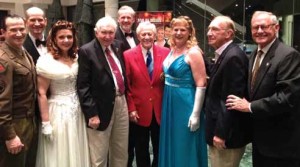 Zartman’s face after meeting Tallon – priceless. On March 14th and 15th, in a tribute to Vietnam Veterans and on the 41st Anniversary of POW ’s releases, you can meet these WWII Heroes along with renowned Vietnam Prisoner of War archivist, Lee Huminston, who will give a reading from his soon to be published book of poems written in the cells of Hanoi, North Vietnam and in Peking, China, titled Voices from the Dark. He is responsible for major POW displays at the Richard M. Nixon Library, The USAF Academy, and the Smithsonian Museum of American History. 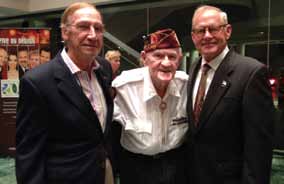 Here you can forge new friendship, hear great music, taste great BBQ and meet those for whom freedom has a taste we will never know.