Many charity events happen outdoors, but the “Prelude to a Park” gala event is truly unique. Most charity events have close access to water and facilities like kitchens and building resources. The Gordon River Park gala taking place this spring has a tall order of logistics that would test even the most seasoned fundraising team. But it has taken years for the dream of the Gordon River Park to come to fruition and it is destined to become a Naples legacy – no matter the challenges.

The logistics of presenting a gala event on undeveloped ground are dizzying. But the team behind “Prelude to a Park” benefitting the construction of the new green park by the Gordon River is undaunted. Recently the group met to discuss some of the logistics that will factor into the gala and how they plan to celebrate the spirit of the park in the theme of the event.

“Prelude to a Park” Gala Chair Delores Sorey is excited about what the decorations committee has presented especially in light of the challenges they’ll face with producing a party on raw land. “It is so exciting, because it’s almost like a puzzle with many components,” she says. “This is much more difficult than thing we have done before but I know we can do it.” Several of the challenges include lights and generators, coordinating golf carts and valet parking. All may seem like small hurdles, but the park will be a green space and hence it is not near any buildings. And because the park gala will salute the natural elements of the locale, organizers will have to get creative with lighting and event infrastructure.

The decorations committee consists of Gabrielle Nappo, Lynn Drexler, Roz Travis and Chris Barnett, whose husband is former Mayor Bill Barnett who will serve as auctioneer for the gala – although the gala will include more of a sale than an actual auction, with actual trees, benches, lamp posts, bricks, chickee huts and other park necessities up for grabs.

“I think this is long overdue for the children in our community – there are so many young people and young professionals moving into town and what a blessing that the council and the city is behind it,” says Travis who owns and operates Roz Travis Interiors in Naples.

The gala is slated to be “party chic” because the park is not paved. Mulch will line the walkways although there will be a dance floor. A band will play soft music during dinner and later for dancing. Organizers are encouraging ladies to steer clear of platform or stiletto heels. There will be approximately 40 tables of 10 however if an attendees needs a table of 12, Sorey says it can be arranged. Partygoers can expect to imbibe on wine, beer and non-alcoholic beverages.

Lynn Drexler relishes the challenge of starting from nothing to create something spectacular.

“There will be a full moon that night so we’ll have the moon, luminaries, twinkle lights and candles and the lights sparkling off the water,” she says. “We’ll be incorporating leaves and trees, but a lot of our decorations have to be logistic-minded because we have to light up that space for safety and not take away from the moonlight.”

That natural beauty of the locale is what Gabrielle Nappo believes will inspire people to become passionate about the park and continue to support the endeavor.

“This is much needed and we’ve been talking about doing this in that neighborhood for a long time, so now we just have to get down to how we make those ideas real and over the next moth that is our focus,” says Nappo.

Chris Barnett says whatever the decorations become, being able to see the sky and appreciate the beauty of this unique section of town is critical to the success of the event.

“We’ll have beautiful table settings and the event will be remarkable, but the overall thing is this outdoor space where our park will be,” says Barnett.

As for the Gordon River Park itself, attendees will have the opportunity to see what the park could eventually look like long before the park awakens to receive its first citizens.

Architect Matt Kragh of MHK Architecture & Planning is designing the park pro bono through his firm. MHK Architecture & Planning is known for pouring on the passion when it comes to Naples most interesting projects. Matt Kragh is the go to architect for meaningful projects including the Naples Dog Park and numerous historic homes throughout the city.

At press time, Kragh was one-third of the way through designing the park but was quickly approaching the halfway mark. He is drawing from a series of design charettes at which dozens of residents and civic members of the community provided input as to what they feel belongs or doesn’t belong in the new park. Kragh and his team have incorporated those preferences.

“We’re just facilitating the park – the public is designing it,” he says.

“We’ve had lots of public impact through 16 different design charettes and public hearings, during which we’ve involved the community in the process of the design,” says Kragh. “The first design charette was a red dot / green dot exercise – we posted more than 100 park images with different park components from around the world and each person received green and red dots to mark their preferences.” 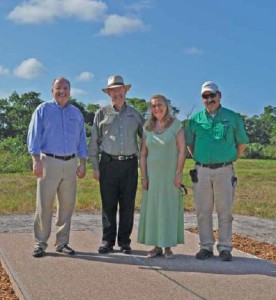 At the meetings, residents stood next to each other talking about the images – they placed red dots on images they didn’t liked and green dots for images they liked for the park. Kragh and his team gathered the information and created a plan from the information that would be viable for the land and space.

“It gave us a sense of what the public was expecting and we also had a lot of input on social media – and Sam Saad’s office volunteered to help hook us up on Facebook and other social media sites, and at the charettes people also received blank canvases on which they could design their version of a park,” said Kragh, who compiled all of the information into a design program. “We designed two park plans for discussion, presented each park plan and took input on what people liked and didn’t like about each plan.”

All of those comments will factor into the creation of Plan C – which will go through another vetting in January for planning officials.

“After all of that and the 16 public hearings on the schedule, on March 5, 2014 we’ll have a final plan in 3D which will be used at the gala as part of the fundraising effort,” says Kragh, who plans to unveil a an animation of the park. “This is a legacy project and with a young son, I can’t wait for him to enjoy the park.”

The primary derivative of the park is to provide public access to the Gordon River. In planning the design, there will be a couple of small mounds for superior vistas of the river.

“There is nothing like that in Naples with a cascading vista from an elevated platform but the most important part of the park design is the foot bridge over the river which will connect the two sides,” says Kragh of the bridge, which is estimated at $1.2 million originally. “We want to fundraise for these components among others.” Eight-tenths of the park will be open area, completely natural and more about passive activities.

For more information about the park or gala event or to donate, visit www. NaplesGordonRiverPark.com or call 239.263.2673.