Blog - Latest News
You are here: Home1 / Health and Fitness2 / Breakfast In Red 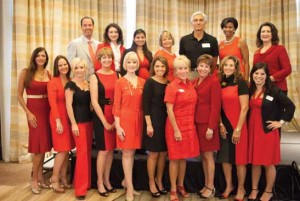 The photo represents a portion of the Naples Legacy and Circle of Red members & Red Tie Society
who were in attendance for the breakfast. All are active participants in the planning and execution of
the Go Red lunch to be held in the spring.

Ladies – and a few men – donned their best red outfits to show their support for the fight against women’s cardiovascular disease at the American Heart Association’s Go Red For Women “Breakfast in Red” event on Wednesday, Sept. 18, at the Waldorf-Astoria Hotel in Naples.

The annual breakfast serves as the campaign’s kick-off, which continues throughout the season with National Heart Month in February and culminates on Friday, May 9, with the Southwest Florida Go Red For Women Luncheon at the Hyatt Regency Coconut Point Resort and Spa in Bonita Springs.

The event drew an estimated 200 community and business leaders, including members of the American Heart Association’s Circle of Red and Red Tie Society. These two groups are dedicated to making an impact in our community’s fight against heart disease, and have the influence and resources to help rally women and take charge of their heart health and provide a personal commitment to help find a cure for the Number 1 killer of women. Brittany Cohill chairs the 2013 Circle of Red and Andrew Sicnolf chairs the 2013 Red Tie Society.

In speaking to attendees, 2013 Go Red For Women Chairwoman Christin Collins reminded local women that heart disease affects one in three women. Yet since Go Red Red breakfastin For Women began a decade ago, the campaign has made a measurable difference in the health of women.

In 1997, only 30 percent of women knew of the danger posed by heart disease. Now, 54 percent of women are aware that heart disease is their biggest health threat, and research shows that women who get involved with the Go Red For Women movement are more likely to make healthy choices such as exercising, eating right and checking their cholesterol.

Breakfast attendees also heard from Dr. Shona Velamakanni, a cardiologist with the Naples Heart Institute, who spoke on the importance of prevention and how heart disease affects women differently than men.

“Who has time for a heart attack?” Dr. Velamakanni asked. “It’s very inconvenient to be sick.”

For many women, this willingness to dismiss their own symptoms and put others first can have dangerous consequences, yet it’s a common occurrence as they try to juggle work, family and other responsibilities. Go Red For Women educates women to listen to their symptoms and to take action to protect their heart health.

In total, the breakfast raised $33,375, a figure that included a $20,000 commitment from “Queen of Hearts” sponsor Donna Sublett.

For more information on Go Red For Women