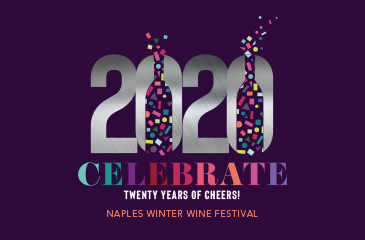 Today, the Naples Winter Wine Festival (NWWF) announced that the 2020 Honored Vintner will be France’s acclaimed Saskia de Rothschild of Domaines Barons de Rothschild Lafite and Chef de Cuisine will be Chicago superstar Sarah Grueneberg of Monteverde Restaurant & Pastificio. Both the vintner and chef will be recognized for their legacy and innovation in the food and wine industry during NWWF’s 20th annual event, themed “Celebrate: 20 Years of Cheers!” on January 24 – 26, 2020 at The Ritz-Carlton Golf Resort, Naples.

As the Honored Vintner and Chef de Cuisine, de Rothschild and Grueneberg will set the stage for a weekend of unique, once-in-a-lifetime wine and culinary experiences alongside an impressive line-up of the world’s most acclaimed vintners, chefs and Master Sommeliers hailing from over six countries. Boasting an impressive collection of over 12 James Beard Winners, this year’s roster includes notable vintners such as Piero Antinori, Ann Colgin, Olivier Krug, and Laurent Ponsot, along with chefs Thomas Keller, Emeril Lagasse, Donald Link and Charlie Palmer.

“Year after year I have been impressed to see the impact that a charity wine event like the Naples Winter Wine Festival can have on the lives of hundreds of children,” said Saskia de Rothschild of Domaines Barons de Rothschild Lafite. ““I’m humbled to have been selected as the Honored Vintner for this year’s Festival and look forward to having the chance to share some of our family’s wines with an audience of passionate collectors and wine lovers.”

“Saskia is the perfect choice to be our 2020 Honored Vintner as she is helping continue the long legacy of Domaines Barons de Rothschild Lafite flourish in a new age,” said 2020 Festival Co-Chair Joe Masterson. “We’re honored to have her with us during the 20th anniversary of the Naples Winter Wine Festival to help us celebrate our past and solidify our future.”

This year marks de Rothschild’s first time attending NWWF and Grueneberg’s third time participating in the Festival as a celebrity chef. The recognized vintner and chef will join an additional 31 vintners and 19 chefs to help raise funds for underprivileged children of Collier County. Every dollar raised under the tent during NWWF will be given to the Naples Children & Education Foundation (NCEF), the founding organization behind NWWF, and distributed to local organizations and strategic initiatives that provide the programming needed to build a better future for the children of the community.

“After participating in the Naples Winter Wine Festival for many years with so many iconic chefs at the helm, I am extremely humbled to be selected as the 2020 Chef de Cuisine,” said Chef de Cuisine Sarah Grueneberg of Monteverde Restaurant & Pastificio. “This Festival is one of my favorites as it brings together some of the best chefs and vintners for an important cause, and it’s fantastic to see the positive impact that the Festival continues to have on the community.”

“We’re excited to have Sarah back with us this year and appreciate how dedicated she has been to the Festival over the last few years,” said 2020 Festival Co-Chair Nancy Masterson. “As a trailblazing woman in the industry, she has paved the way for many future female chefs around the world and we’re honored to have her continued support in our cause.”

NCEF will be kicking off the weekend’s festivities by hosting their annual Meet the Kids Day on Friday morning, where guests will have a chance to meet children who have received resources and support from NCEF funds and see how their involvement has positively impacted the community. During the heartwarming event, four hand selected vintners will be pouring some of their best wines to give guests a taste of what’s to come throughout the weekend.

This year’s Meet the Kids Day luncheon vintners include:

The weekend will also include a number of intimate Vintner Dinners hosted by Festival Trustees in private homes and landmark settings throughout Naples where guests will enjoy beautifully curated multi-course dinners and wine pairings with award-winning chefs and vintners.

This year’s participating vintners include:

This year’s celebrity chefs include:

Following Friday’s opening festivities, guests will flock to the Festival’s main event, Saturday’s live auction. Ticket holders will have the opportunity to bid on exclusive items ranging from luxury cars to around-the-world trips and private dinners at the world’s most famous wineries. All proceeds from the live auction will benefit charities that improve the physical, emotional and educational lives of Collier County’s underprivileged and at-risk children.

Ticket packages to the Naples Winter Wine Festival start at $12,500 per couple. A $30,000 package that includes reserved seating for a party of four at a Vintner Dinner and under the auction tent is also available. To inquire about tickets to the Festival, please contact Barrett Farmer at barrett@napleswinefestival.com or 239-514-2239.

For more information on the 2020 NWWF and related announcements, please visit www.napleswinefestival.com

ABOUT THE NAPLES CHILDREN & EDUCATION FOUNDATION

The Naples Children & Education Foundation, the founding organization of the Naples Winter Wine Festival, is improving the educational, emotional, and health outcomes of underprivileged and at-risk children. Through its annual grants and strategic initiatives, NCEF has impacted over 45 of the most effective nonprofits in the community, providing 275,000 children with the services and resources they need to excel. NCEF’s unique approach, which emphasizes collaboration between organizations and bridges public and private resources, has become a blueprint for how to transform a community, one issue at a time.

ABOUT THE NAPLES WINTER WINE FESTIVAL

The Naples Winter Wine Festival, one of the world’s most prestigious charity wine auctions, offers a weekend of unforgettable memories. Guests enjoy world-class food and wine during intimate dinners in private homes, and are invited to bid on once-in-a-lifetime travel and wine experiences during an electrifying live auction. Since its inaugural event in 2001, the NWWF has raised more than $191 million, making a profound difference in the lives of thousands of children.

Neapolitan Chapter of the Embroiderer’s Guild of America is hosting an Ev...