Blog - Latest News
You are here: Home / Columnists / Health and Fitness working on our CORE

Over the past many years, the plank is an exercise that is frequently done to work on the core. Strengthening the core is key to a healthy back and helps to provide you with a healthy strong group of muscles that act as a stable platform. If this core is not strong and stable, excess strain can occur not only in the spine, but in other joints and muscles throughout the body.  Functional movements work best when each area involved plays their role of mobility, flexibility and stability efficiently. The core is key!

Some core muscles are situated isometrically for your muscles to coordinate and hold a position correctly. For example, the transverse abdominis fires when going to lift something with the arms provided there is a healthy movement pattern. If injured, sometimes the firing of this muscle is absent or delayed and work needs to be done to reignite this activation. Only after you master the proper isometric hold should you then add other movements to make those muscles work, some isometrically and some with a more advanced dynamic ability. 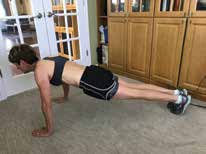 POOR HEAD AND LOW BACK POSITIONS

The plank is an exercise that can be used to start to coordinate efforts for proper firing after that basic activation has been worked on. In this plank, neuromuscular re-education can get the muscles to fire more naturally so that one does not have to cognitively think about it. There are so many variations of the plank. The key to picking what is good for you is dependent upon the  strength that you exhibit. Three main areas to focus on in regard to positioning are the abdominal/low back, shoulders/scapulae and the neck.

First, when you get up into a plank position of any kind, try and keep your head and neck in alignment with the trunk. Do lift the head where the eyes are facing forward. Keep the head in alignment with the trunk. A short backward bend position of the head utilizes the motion of the top two vertebra and associated muscles as well as the sternocleidomastoid. This muscle is often one of the most over utilized muscles in the neck. It often overpowers all of the small deep neck flexors which  can over time create muscular Imbalances and eventually lead to neck dysfunction. 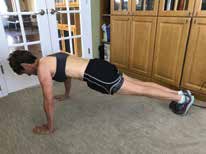 CORRECT PLANK WITH NECK IN LINE
AND ABDOMEN IN

Secondly, whether the exercise is performed on the elbows or hands, the shoulder complex needs to be engaged properly in conjunction with the neck and spine. If the shoulder blade (scapula) muscles fail to hold properly, excess pressure on the shoulder joints may occur. The scapulae should remain tight up against the trunk with no major winging or tipping. These problems signify problems.

It is often asked, which area fails first, the shoulder complex or the spine? In the plank position it is pertinent to avoid both excessive arch in the low back and pressure in the shoulders. This includes getting up into the position. Holding a pelvic tilt under-engages the abdominal musculature, first in a shortening way then in an isometric hold. More importantly, it is about drawing in your abdominal region igniting the transverse abdominis and not so much the rectus abdomens. This isometric hold is the key. If the back arches in the position then the exercise can no longer be held in position and the exercise should be aborted.

In addition, arching the back here can lead to back pain. If proper position in the plank cannot be held when performed on a mat or the floor then the exercise needs to be made easier so that proper form can be mastered. A beginning plank can be used which would be with the knees down on the mat. This shortens the lever and
lightens the load on the spine. If the knee down position cannot be done correctly then an alternative position should be used. The floor position requires that you can hold the plank against gravity. Many cannot hold this
position properly.

Planking on an incline with the arms on a table should be considered. Being on your elbows versus up on the hands is a lower posture for your shoulder complex to master. If this still does not allow proper form, leaning against the wall can be tried. Then as the muscles get stronger the positioned can progress down toward the floor so that more gravity affects are present. Exercise smart! Progress exercises properly only after mastering one level as to try and prevent injury. Sweat the details because paper stabilization when in a controlled environment preps the body’s muscles for functional movements and activities.
Here’s to your health!